9 Unique Ways To Add Traffic To Your Trade Show Booth

9 Unique Ways To Add Traffic To Your Trade Show Booth 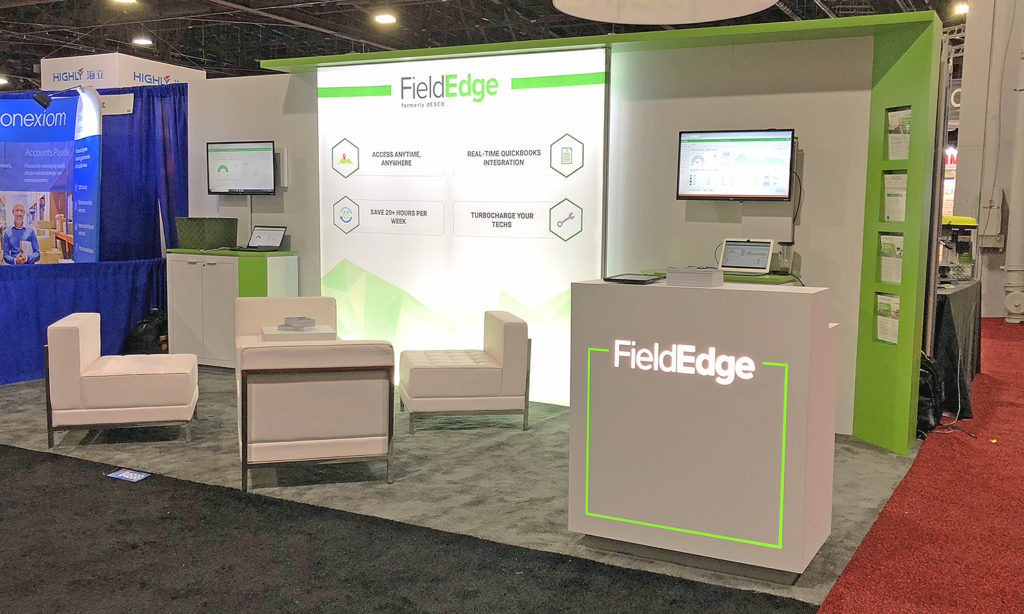 These days it seems as if every trade show you walk into is comprised of endless rows of booths lined with LED screens, elaborate sound systems, and multicolored, brightly lit up displays. Companies spend tens of thousands of dollars each year to make sure their booths are modernized and their messaging is crystal clear. But more often than not, once they go home, the logoed pens get lost, the swag water bottles get pushed to the back of the least used cabinet, and attendees stop becoming engaged with your brand.

Regardless of your desired outcome, whether that be a filled visitor spreadsheet or still more social media posts about your product. Simply hoping that your booth is good enough to grab random attention won’t deliver the return on investment that you’re likely looking for. That’s why it’s important to plan early and spend time thinking clearly about your end goal, as well as the audience or demographic of the show you’re attending.

If you’ve got a few minutes between answering emails, check out a few ideas to consider while deciding how you might want to build traffic to your booth.

Plan Ahead To Bring Traffic To Your Trade Show Booth

Chances are that by the time attendees get to the trade show floor they’ve already made up their minds about who they are going to see. Most have perused the event webpage or looked through the PDF of exhibitors and picked out the reps or brands they are already familiar with. So how do you get people to come to your booth?

Plan ahead and ask yourself the following questions when designing a trade show exhibit for a show.

What are my goals for exhibiting at this trade show?

Every company has different definitions of success when it comes to trade show exhibit booths. For some, they measure their return on investment (ROI) on how many leads they can fill a contact spreadsheet with. For others, they measure the ROI by how engaged people become with their brand. Either of those definitions of success takes some level of analytics. For that, you should look at what your target goal is and then figure out how you want to measure and quantify your success. If you need more info on measuring Trade Show ROI and ROO, check out this article for some helpful tips.

Who is my audience?

Chances are you’re a big company and you’ve already had brand studies done on your product and you’ve identified who your targeted audience is. However, these studies are usually more reflective of the general population and may not actually be the type of people attending this particular show. If you have attended the conference before, look back and think of the types of people who visited the booth in the past. Which of those attendees converted to customers? Even those who didn’t buy; which of them became engaged with your brand?  These are the people you want to target. Find out what motivates them. Are they men or women? Are they younger or older? Do research on what drives your demographic and design the booth to capture their interest. Your font, your colors and your images should all work together to grab their attention and allow them to discover who you are as a brand.

If you would like to know more about designing your booth for a specific space, you could give this article from Brightpod a click. Here are our 9 suggestions for standing out from the crowd and making your booth the one to visit at any expo.

In today’s world of heavy streaming and binge-watching their favorite Netflix and Hulu series, most people can appreciate the value of a really good trailer. A brief preview of what’s to come, properly punctuated by building suspense, fast pacing, and a rousing score can build quite a bit of anticipation long before audiences are even entirely sure what the show is about. Even some of the worst programs have pulled in initial viewers through the use of a solidly built, well thought out trailer. Capitalize on people’s desire to be entertained and consider putting together your own sizzle reel for your product or service to be prominently displayed in your booth. It doesn’t have to be long; it just needs to capture their attention enough for your very talented booth attendees to flash a smile and invite them in to hear more about your top-notch business. Don’t know where to start? There are tons of very talented video producers available on www.fiverr.com who would be more than happy to lend you their expertise at a fairly inexpensive rate. At trade shows, nearly everyone there is a visual person initially. Capitalize on that!

Remember being a teen and getting dropped off at your local theatre or bowling alley (or rollerskating rink, if you’re a little older)? Enticed by the smells wafting over from the concession stands, dazzled by the blinking lights in the arcade, you and your friends rarely passed on the chance to commemorate that parent-free night of brief independence with a trip to the photo booth. Those strips of four low-res, hilariously cropped pictures of you and however many of your group you could cram into that seat built for two eventually became decorations for the inside of your locker, or the edge of your mirror,  or even the sun visor of your car. Though you had hundreds of shots from your dad’s 35mm in vacation albums galore, those shot inside those two little drawn curtains never seemed to get old. Even today, when nearly everyone carries a 12 megapixel camera in his or her pocket, the allure of the photo booth lives on. Add one to your booth’s display and watch the years fade from the faces of your visitors as they relive a piece of their youth. And with the many custom branding offerings available, you can ensure they see your logo, slogan or both on the booth itself and on their nostalgic keepsake to be enjoyed time and time again.

Let’s be honest: lots of trade shows have terrible wifi networks. There you are in a huge venue with hundreds – maybe thousands – of internet connected devices, and you’d love nothing more than to pull up that email your office just sent. The problem is your phone or tablet won’t connect because the signal’s too weak or the files are taking too long and the moment is slipping away! But what if the booth you’re standing in had its own localized, always-on network that you could use immediately hassle-free? Even better, what if that booth with the incredibly convenient and wonderfully functional wifi was your own?  Lots of venues will be more than willing to rent you a router and a private network (for a steep fee, of course), but there are also several third-party options available that will let you be the hero to both your booth attendees and your accounting office.

Regular convention attendees know that these trade shows can be exercises in extreme multitasking. You’re making your way around the trade floor, a pocket full of business cards, marketing materials tucked beneath your arm. You’ve got two bags of flyers, brochures, and swag slung over one arm. There’s a flash drive from the last booth you visited slowly sliding off  the top of the criminally overpriced coffee you were just able to snag in a rare free moment between stops, and that guy from that company you met at that other show is shuffling toward you; no doubt to talk your ear off at this one too. You’re going to have that conversation – after all, that’s why you’re here – but wouldn’t it be great if you could at least put your juggling act on hold for a few while you exchange data points with the three other people who will no doubt approach you before you’ve even finished this interaction?

You’re not alone. This is why booths with workspaces are so very valuable and rarely empty. Enter long tables and comfortable chairs to lounge in, high tables at which to stand and chat, and traditional tables perfect for shaking hands across and signing contracts. A well designed, open and attractive workspace can make or break a potential closing, so consider creating one in or near your own booth.

Not everything has to be 100% grind at these events. Sometimes exactly what a jet-lagged, sleep-deprived overstressed conference goer needs is a chance to turn off Go-Mode, even if it’s just for a few. Something like a Paint Splat Booth creates an opportunity to relax and just enjoy the feeling of doing something that doesn’t require the level of effort that everything going on around you demands. Sling some colors, create some abstract art, make a little bit of a mess. You’d be surprised how therapeutic it can be. 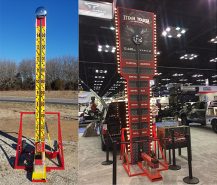 Speaking of taking a break, sometimes the best way to relieve some of the stress on the floor is to get it out with a little friendly competition. Air Hockey, a Hoops shootout, even an old-fashioned game of Skeeball can provide relief, give a little stretch and break the serious mood – giving your guests a chance to approach the next part of the show with a smile. Bonus points if the games feature your company colors and logo.

Drinks, anyone? If your trade show will let you, then I would get a beverage cart and brand it. Have someone ride it around the trade show floor giving away beverages for free. Have signage tying the cart back to your main trade show booth. 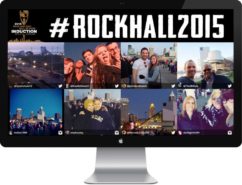 Social Media is all the rage these days. And anyone who still uses the phrase, “all the rage” probably should hire someone younger to handle their company’s social media. But once that millennial has it up and going, one of the coolest ways to put it out for the people in the convention hall to see is with a large-scale Twitter Feed or an Instant Mosaic. Let other people see the real-time interactions with your company, post photos or videos, or even flash messages to the people standing there.  Hilarity is bound to ensue.

Let’s Make A Deal, Jeopardy, and Wheel of Fortune never get old. Ever. Give your visitors the opportunity to show off a little skill or knowledge, all in exchange for the chance to “WIN FAAAAAABULOUS PRIZES!!” and you’ll be the talk of the show!

Building traffic to your booth can be a very daunting task, but it doesn’t have to be. First, set your goals or figure out what you want to get out of the show. Next, look at the type of people attending the show. Then consider doing something fun and memorable beyond just giving free stuff away. Follow those few easy steps and you will be on your way to having a much busier and successful trade show booth. If you need some ideas for trade show swag or promotional items, then check out the link below.