Giant Chess in the Hamptons

Absolute Amusements is proud to play a small role in the Revolve in the Hamptons event. Among several other giant games, we did a Giant Chess game for them to set up in the courtyard of one of their locations. 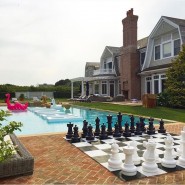 Chess in itself is a game for all ages. Now take that classic game of chess that everyone loves and make it giant – now you have a game everyone wants to play! Giant Chess can bring excitement to any event. It can be used outdoors at a house party in the Hamptons (like the one pictured to the left) to a convention in Las Vegas.

Absolute Amusements can take it a step farther and brand the chess pieces with almost anything you can think up! Check out a few more photos of the Revolve Clothing Event below. Don’t forget: if you’re planning an event or reception, then contact Absolute Amusements to see how we can bring the WOW to you.